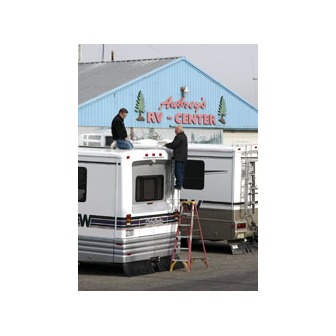 Thank You! Your rating has been saved.
Description Details/Specs Reviews Send Message News


Our founders Aubrey and Giulia Reeves are both long time Yakima Valley residents. Like most young people, Aubrey wanted to move to the big city after high school. In 1960, after spending one year working for Boeing in Seattle, Aubrey returned to the valley to be closer to his family.

Aubrey worked for Chinook Mobile Lodge a local recreational vehicle manufacturer. He started by hanging exterior metal on campers, trailers and 5th wheels and soon became a line foreman. Armed with many skills learned at Chinook, Aubrey opened Aubrey's Camper Repair in 1965. He built his first camper from scratch for an El Camino.

In 1968 Aubrey's RV opened in building #1 in their current location at 2010 Landon Ave. in Union Gap, Washington offering RV service and repair. In 1971 they took on the Coleman line of trailers and added parts and sales for their RV customers. The 3rd and final building was added in 1994 adding 3 more bays for service.

Aubrey still loves the RV business after all these years. He says, "there's never been a day that I don't like going to work." He likes working with customers but also enjoys hands-on repair and service work having re-built 5 unique motor homes over the last several years.

Aubrey and Giulia are now semi-retired having turned the keys over to their two children Carolyn Gefre and Mark Reeves but they are never far from the business that they started so many years ago.

Be the first to add a review for this item.

There are currently no articles available.
Related Categories
Installation/Maintenance/Repair Vehicle Repair and Maintenance